Save Time in Your CCIE Lab with "Router Preconfigs" 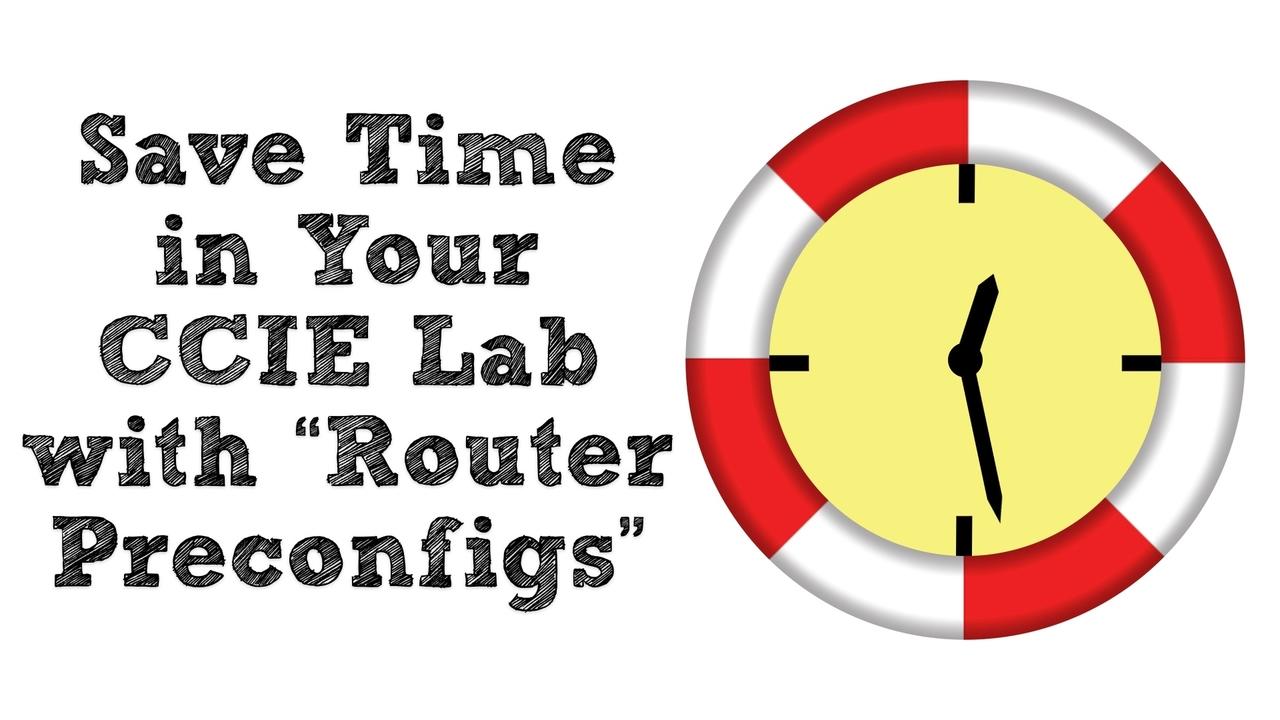 On any CCIE lab, time is your most precious commodity. Opinions vary about the best time saving strategies. Some people would have you spend the first 30 minutes of your lab carefully reading through the lab tasks you’ve been given. However, I’m in the group of people that suggests doing a much quicker read-through, noting important features that are going to need configuring, with the belief that you’ll not remember enough detail to justify spending half an hour reading the tasks.

For years, I’ve been promoting my modified device-based approach for tackling the CCIE Collaboration lab, where I have you make a set of boxes on your scratch paper, one box for each device in your topology. Then, as you do your initial read-through, you put task numbers in boxes representing the device on which the task needs to be configured. Then, you can visit each device a minimal amount of times to meet all your lab requirements. If you want to watch a video I did demonstrating that approach, click HERE.

This blog post is about yet another time-saving strategy that I call router preconfigs. The idea is, we can spend a minute typing out time-saving commands into a text document, and then paste those commands into all of our routers and/or switches. Let’s consider some of these time savers commands:

Under the intense time pressure of a CCIE lab, it’s frustrating if your router or switch connections keep timing out. You can prevent that from happening by setting your console lines and your VTY lines to have a timeout of zero minutes and zero seconds, which Cisco IOS interprets as “never timeout.” Of course, this would not be a recommended command for a production network, for security reasons. However, within the context of the CCIE lab, it can save you from having to re-login to multiple devices throughout the day. It’s the exec-timeout 0 0 command, and I like to issue it for both console and VTY lines.

Have you ever been in the midst of entering a bunch of configuration commands, and while you’re in the middle of typing one of your commands, Cisco IOS feels the need to send a Syslog message to the console, and that message (which might be telling you an OSPF adjacency was formed or an interface went down) injects itself right in the middle of what you were typing? This makes your command very difficult for you to read. A way to prevent such an incursion to your typing is to use the logging synchronous command in line configuration mode, for both console and VTY lines. After entering this command, if Cisco IOS feels the need to send you a Syslog message, it will then have the courtesy to paste into your terminal session what you had already typed, allowing you to pickup where you left off.

Exiting back out to global configuration mode, I would next want to enter the command no ip domain-lookup. This prevents Cisco IOS from consuming several seconds in a futile attempt to resolve what it thinks is a DNS name, when in fact, you simply mistyped a command.

As a final time-saving tip, I recommend you create a series of alias commands. These are relatively short commands that get translated by Cisco IOS into relatively long commands, resulting in saved keystrokes. Of course, the specific alias commands you need to create will be dictated by the commands you find yourself repeatedly entering during your practice sessions.

Paste in Your Text Document

After you create your text document, you can then copy it, and paste it into multiple devices in your topology. While this blog post isn’t intended to be an exhaustive list of all such shortcuts, it can save you a significant amount of time. Here’s is a sample of such a text document:

I hope that helps shave a few minutes off the time it takes you to complete your lab.