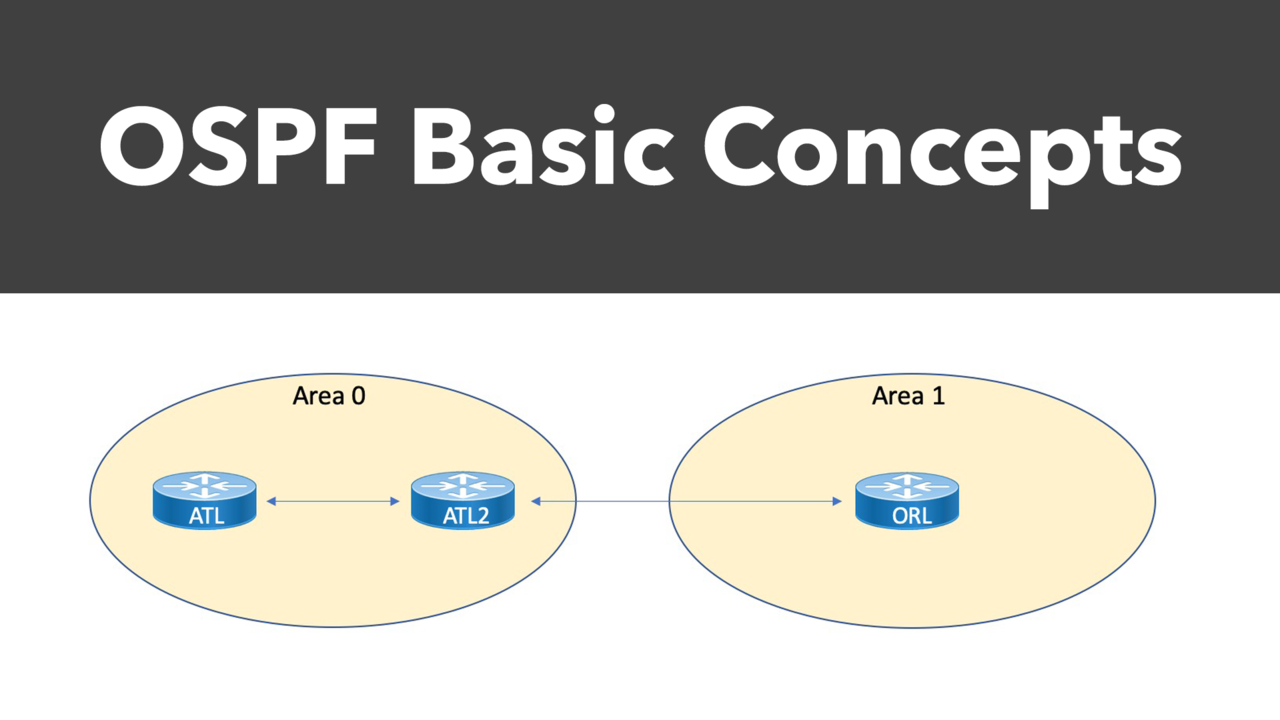 The OpenShortest Path First (OSPF) dynamic routing protocol is one of the most beloved inventions in all of networking, widely adopted as the Interior Gateway Protocol (IGP) of choice for many networks. In this blog series, you'll be introduced first to the basic concepts of OSPF and learn about its various message types and neighbor formation.

An Overview of OSPF

Where does the interesting name come from when it comes to OSPF? It is from the fact that it uses Dijkstra's algorithm, also known as the shortest path first (SPF) algorithm. OSPF was developed so that the shortest path through a network was calculated based on the cost of the route. This cost value is derived from bandwidth values in the path. Therefore, OSPF undertakes route cost calculation on the basis of link-cost parameters, which you can control by manipulating the cost calculation formula.

We like to refer to OSPF as a hierarchical routing protocol. This is because an OSPF network can be subdivided into routing areas to simplify administration and optimize traffic and resource utilization. We identify areas by 32-bit numbers. We can express these as in decimal or in the same dotted decimal notation used for IPv4 addresses.

By definition, Area 0 (or 0.0.0.0) represents the core or backbone area of an OSPF network. Any other areas you might create (Area 10, Area 20, etc) must be connected to the backbone Area 0. If your areas are not connected as described, you must engage in a workaround procedure such as a Virtual Link (described later in this blog series). You maintain connections between your areas with an OSPF router known as an area border router (ABR). An ABR maintains separate link-state databases for each area it serves and maintains summarized routes for all areas in the network.

Because OSPF is a complex routing protocol (unlike a much simpler protocol such as RIP), it uses different neighbor states in its operation. You should know and understand these different states not just for the academic exercise of possessing this knowledge. These states can become critical in your OSPF support and troubleshooting efforts. For example, you might have a router “stuck” in one of these states, and that information can prove critical in fixing the problem.

Here are the states and information you should know about each of them:

Down - This is the first (or initial) OSPF neighbor state. It means that no information (hellos) have been received from a neighbor, but hello packets can still be sent.

Attempt - This state is only valid for manually configured neighbors in a Non-BroadcastMultiaccess (NBMA) environment. In this state, the router sends unicast hello packets every poll interval to the neighbor from which hellos have not been received within the dead interval.

2-Way - This state designates that bi-directional communication has been established between two routers. Bi-directional means that each router has seen the other's hello packet.

This state is attained when the router receiving the hello packet sees its own Router ID within the received hello packet's neighbor field. In this state, a router decides whether to become adjacent to this neighbor. On broadcast media and non-broadcast multiaccess networks, a router becomes full only with the designated router (DR) and the backup designated router (BDR); it stays in the 2-way state with all other neighbors. On Point-to-Point and Point-to-Multipoint networks, a router becomes fully adjacent with all connected routers.

NOTE: At the end of this state, the DR and BDR for broadcast and non-broadcast multi-access networks are elected.

Exstart - Once the DR and BDR are elected, the actual process of exchanging link state information can start between the routers and their DR and BDR.

Full - In this state, routers are fully adjacent with each other. All the router and network LSAs are exchanged and the routers' databases are fully synchronized.

Remember that the full state is the normal state for an OSPF router. If a router is stuck in another state, it is an indication that there are problems in forming adjacencies. 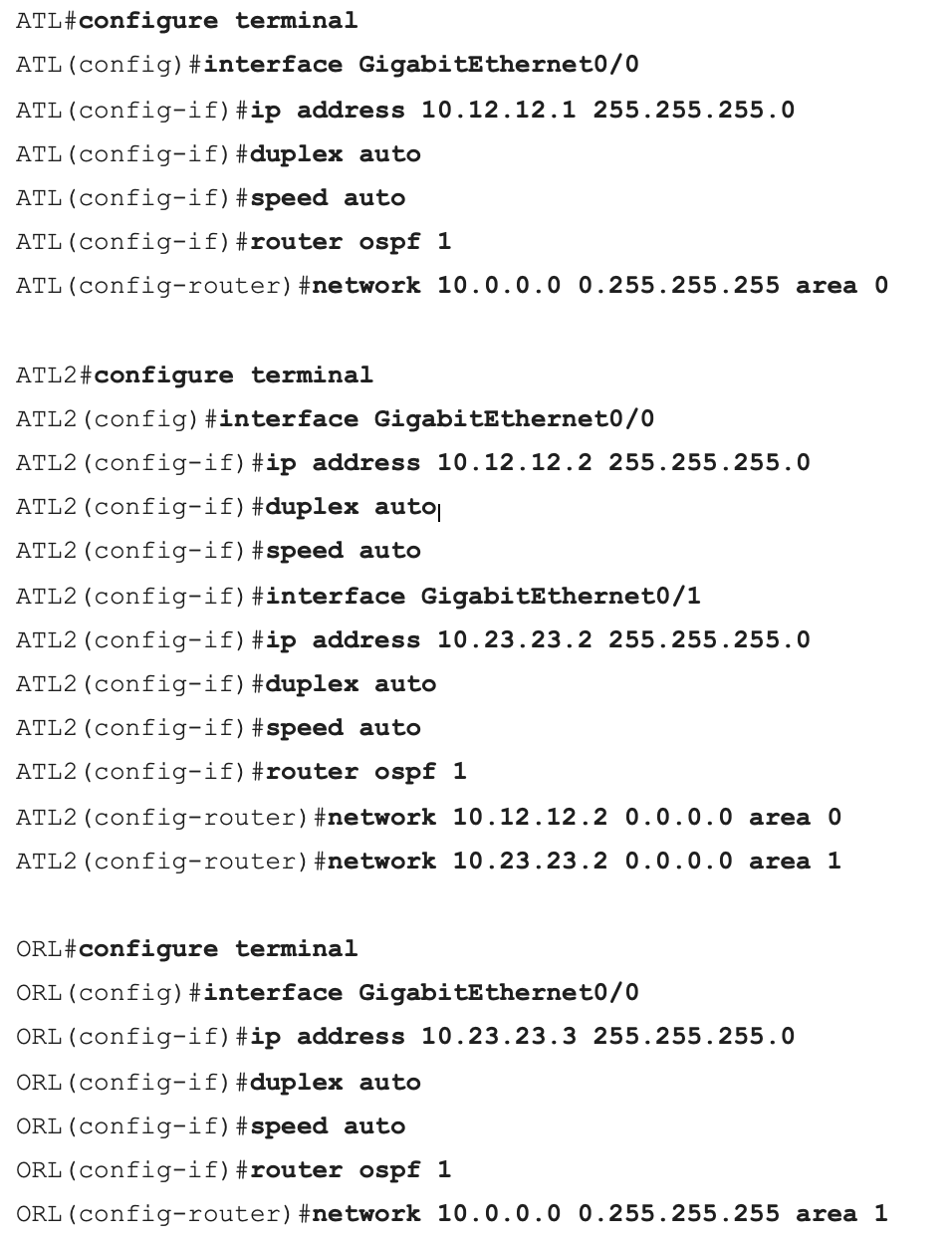 Notice in these configurations that we identify the local OSPF process on the router using a locally significant process ID value. In the example, the process ID of 1 is chosen for all the routers. Also notice that the network statement must contain a wildcard mask that indicates the significant bits in the network value that proceeds it in the command. On the ATL2 Area Border Router, a 32-bit wildcard mask of 0.0.0.0 is used to place one interface in Area 0 and another in Area 1. 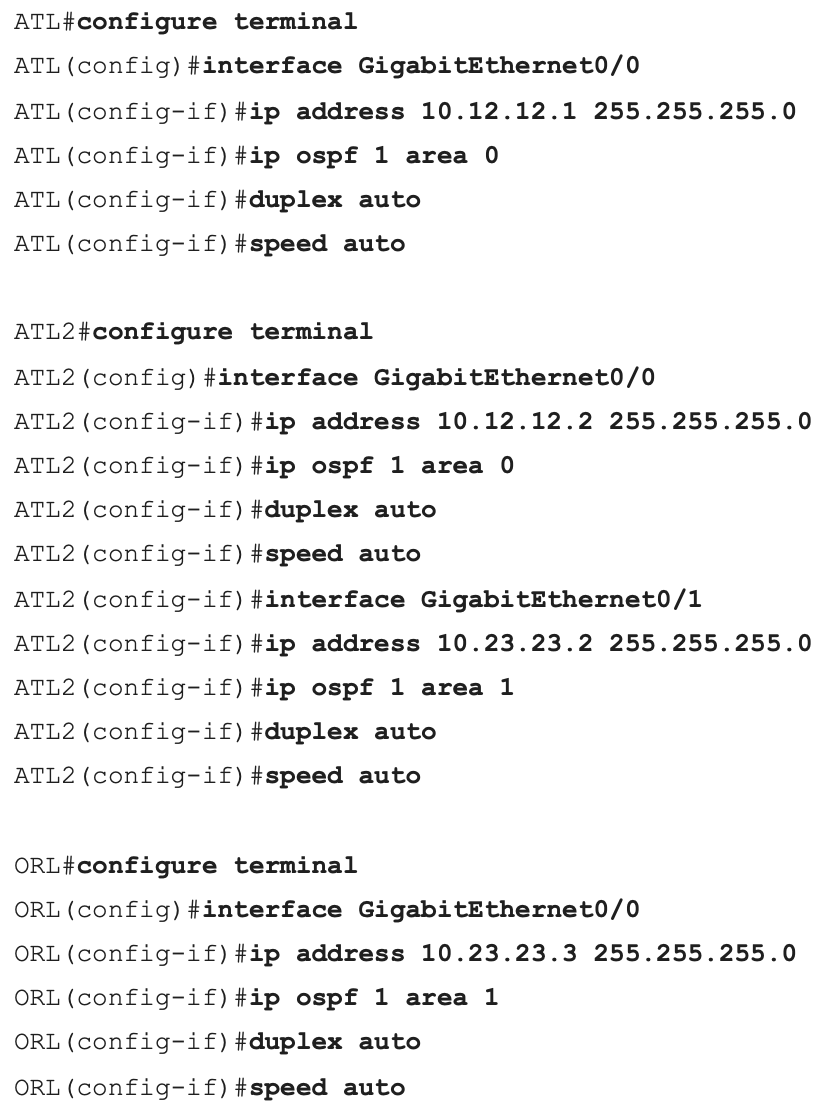 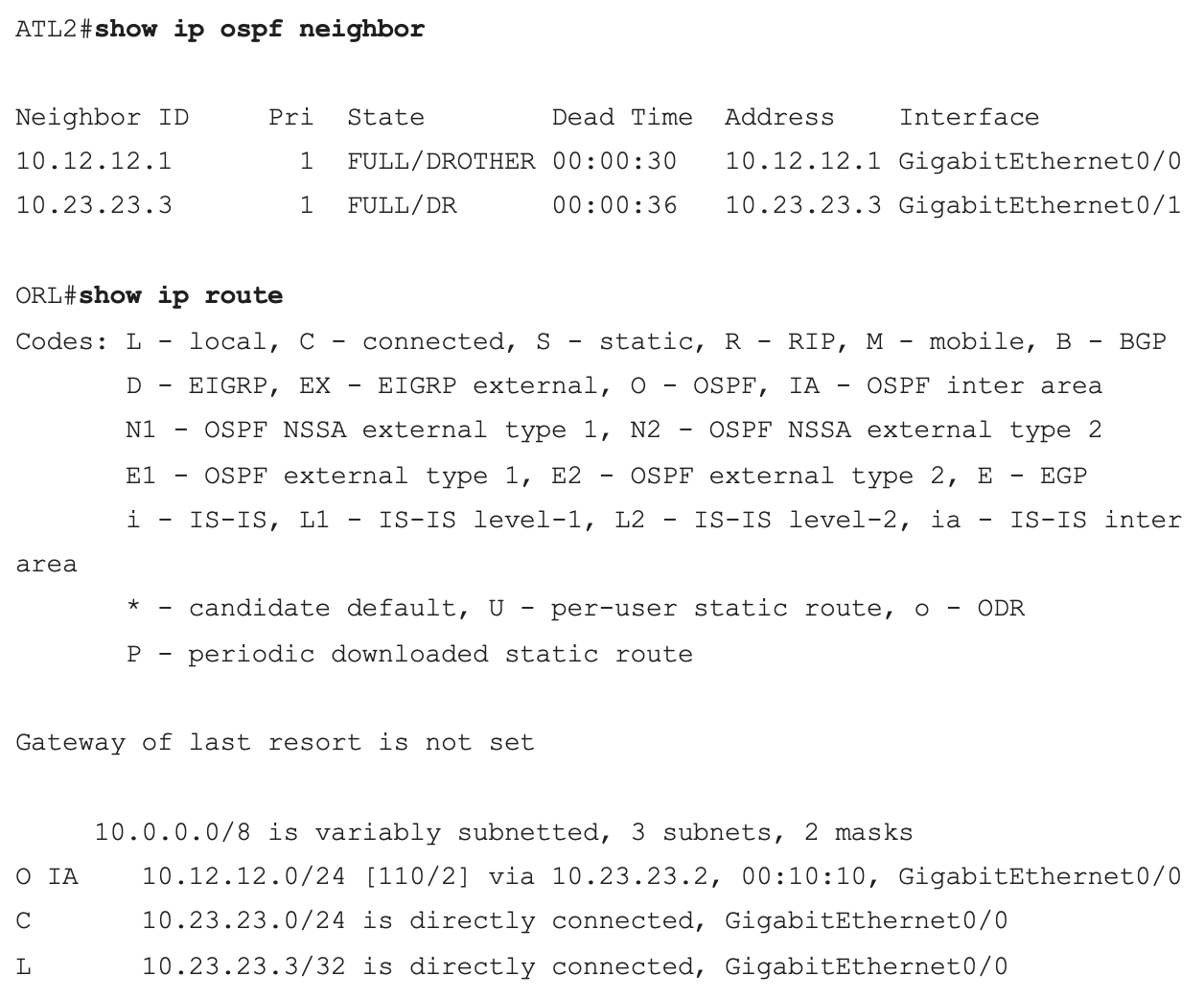 Notice the power of the show ip ospf neighbor command in order to verify the neighbor relationships and their state. On ORL, we examine the routing table to ensure we are learning the OSPF Inter Area route of 10.12.12.0/24.