As a redundancy measure, it’s possible to deploy multiple Cisco ASAs together in a failover configuration, also known as a High Availability Implementation. This requires that the ASAs have identical software, licensing, memory, and interfaces. There are three possible high availability options to protect against downtime, which we'll explore here.

Active/Standby Failover Implementation: In this model, only one of the firewalls is responsible for processing traffic, while the other is designated as a hot standby. The standby device has the ability to take over traffic processing duties in the event that the active device fails.

Active/Active Failover Implementation: In this model, both firewalls actively process traffic as a cluster. The network is able to tolerate the failure of one of the devices, since they are performing identical duties.

The load is distributed so that both ASAs are actively working to back one another up with redundancy.

Clustering Failover Implementation:This clusters together multiple ASAs to act as a single, logical device. The integration and management still work as though this is a single device, but the clustering offers higher throughput and redundancy. This works in a slave/master model similar to the way a RAID disk array works. If one clustered ASA fails, the other has the ability to takeover operations until the failed firewall has been replaced. 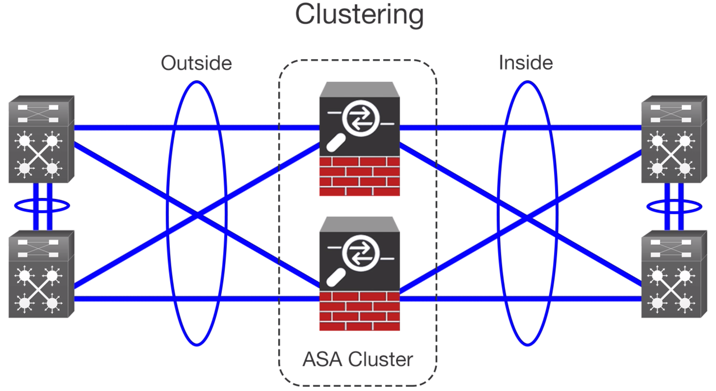 The interfaces connect to two different switches, with a virtual port channel connecting the switches together. This must be done on both the inside and outside security zones.