Certification vs. Degree: My Take on the Age-Old Debate 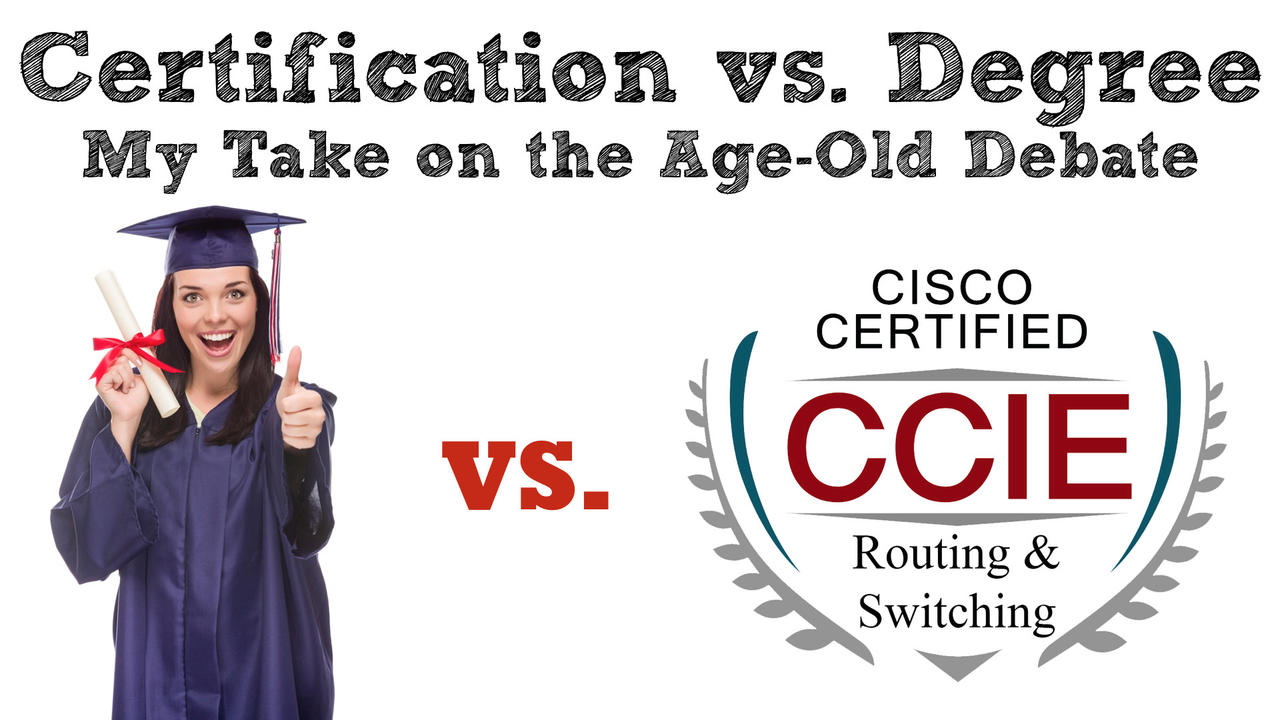 For years, the debate has raged about which is better. Is it better to focus on getting certifications or to earn a college-degree? Excellent points are to be made on each side of the argument. This is the type of question I hear frequently, and I wanted share my thoughts. Now, the next time somebody asks me this question, I can point them to this blog post ;-)

The College of Knowledge 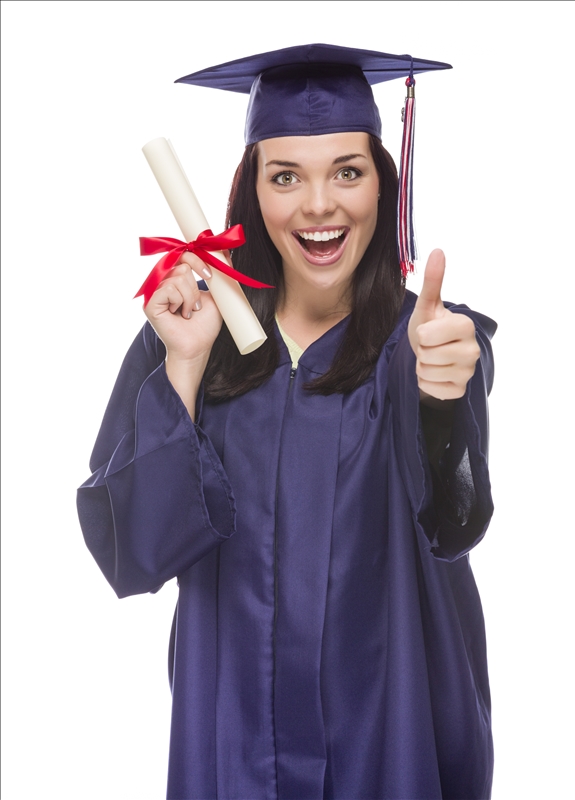 Let me begin by saying that I’m a big fan of academia. I worked at a university (as the Network Manager) for about eleven years. My bachelor’s degree is in Electrical Engineering (BSEE), and I earned about 30 credit hours towards a Masters of Business Administration (MBA) degree. My oldest daughter just finished up her first semester of college. My other daughter is a senior in high school and has already been accepted to the university she wants to attend. My wife and I started a college fund for each of them when they were born, and it feels like we’ve reached a major milestone in our lives as we’re starting to withdraw money from those accounts.

Looking back at my career path, I realize that the job that launched me on my networking career would have passed me by if I didn’t have a BSEE degree on my resume. The experience (and certifications) I picked up at that job led to my next job, a Network Design Specialist for Walt Disney World. My next major career move was to teach Cisco courses live and on-line for a Cisco Learning Partner, which was made possible by the specific Cisco gear I worked with at Disney World. All this to say that, if I didn’t have a college degree at the outset of my career, there’s no telling where I would be today. Having a college degree is especially important for those just getting into the job market, because if they have little or no experience, employers often gravitate towards applications with a degree on their resumes. In fact, many jobs have a non-negotiable requirement of a college degree. So, without a doubt, having a degree gives you more options and opportunities. Besides getting a piece of paper saying that you know a lot about a specific subject, college can help you develop other valuable skills. Examples include: time management, teamwork, and study skills. Consider study skills. When it came to study skills, I was what you might call a “late bloomer.” During through my third year of college, I found myself on academic probation, because of a particularly challenging engineering course that clobbered me. However, having had a couple of summer jobs in a furniture factory and a warehouse, and discovering that manual labor was not my thing, I was motivated to dig deep and develop my study skills. My brief stint on academic probation quickly turned around, and the following year I was on the Dean’s List for academic achievement. I’m confident that had I not been forced to develop exam preparation strategies and skills while in college, I would not have made much progress (or maybe just slow progress) with my Cisco certifications. Let’s sum up some of the benefits of getting that college degree: 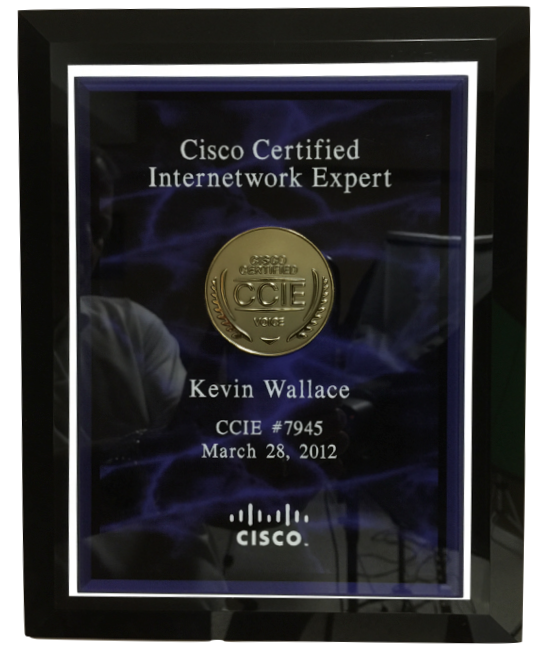 At this point, you’re probably thinking that I’m going to come down heavy on the “degree” side of this debate. Before drawing that conclusion though, let me share my story of dropping out of college to pursue Cisco certifications. It was the mid 1990s, and I was a Network Manager at a large university. I was loving working with the Cisco routers and switches, and I decided to start taking night classes (after work) to earn an MBA, thinking that would be great way to move up the career ladder. I was about 30 credit hours into my studies, when I read some interesting salary statistics. The salary surveys I read said that someone with an MBA earned an average of about $65,000 per year, while someone with a CCIE certification earned an average of about $125,000 per year. Wow! When I read those numbers, I asked myself what I was doing. My evenings were consumed with accounting and finance homework, while my real passion (working with Cisco gear) was something I only got to focus on during my working hours. Why not just focus on going after Cisco certifications, since it apparently paid better, and it was what I enjoyed? The real tipping point in my decision came from rewatching the 1986 movie, “The Color of Money,” staring Paul Newman and Tom Cruise. In that move, Paul Newman’s character (Fast Eddie Felson) was telling Tom Cruise’s character (Vincent), “If you got an area of excellence… you’re the best at something, anything… then the rich can be arranged. Rich can come fairly easily.” Even though I knew I would never be the best Cisco network engineer, I realized that if I put all my energies, which had previously been diluted with my MBA studies, into learning more about Cisco technologies, that was my path to career success. After finishing up that semester of MBA night school, I never went back, and I don’t regret it for a second. Over the years, I’ve conducted my fair share of technical interviews for job applicants, and I would lean towards applicants with a CCNP or CCIE certification, in comparison to applicants with a Bachelor’s of Computer Science of Electrical Engineering. However, when hiring for the university, I was only allowed to select applicants with a college degree. Now, let’s review some of the benefits of certification:

Life is a Timed Test 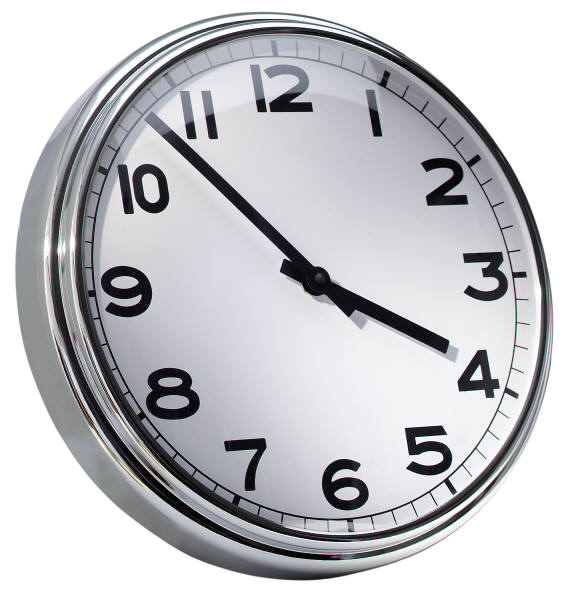 So, what’s an aspiring network engineer to do? There are reasons to stay in school and other reasons to walk away from school and imerse yourself in the ways of Cisco IOS. My advice would actually be different, depending on where someone was in their career.

Disclaimer: The following advice is somewhat generic and might or might not apply to you, depending on your specific situation. If I knew you personally, my advice would be heavily based on my knowledge of your personality, your interest in networking, and your aptitude in the networking field. Please consult the advice of those you trust and who know you and your situation before making any career-altering decisions.

The Rookie (someone in the later stages of high school or in the early days of college):

The “rookie” usually has the luxury of time. They are young enough to invest the time required to complete college, thus opening up a multitude of opportunities that would be unavailable without a college degree. My advice would be to get a Bachelor’s degree in Computer Science or Electrical Engineering, while making time to earn some Cisco certifications (e.g. CCNA R/S and CCNP R/S) along the way. Also, many universities offer network-focused courses (including those participating in Cisco’s Network Academy). So, the “rookie” could earn a degree while picking up some valuable Cisco certifications along the way.

The Career Changer (someone who has been working for years in a different field, but has decided that computer networking is the career for them):

The “career changer” might or might not have a college degree. If they do, great! If they don’t, then I would advise them to focus on certifications. Since they are already well into their working life, I don’t believe investing four  years to get college degree would be wise in most cases. Sure, a college degree would open up more opportunities. However, they could instead spend those years earning more certifications than they could while attending college. They could also build their experience by volunteering their time to install/maintain networks for charitable organizations. The “career changer” would emerge from the same four years required to earn a college degree armed with an impressive resume of certifications and job experience. Although they’ll be banned from some job openings due to their lack of a degree, for the subset of jobs that don’t have such a requirement, they will be very attractive job candidates.

Well, that’s my take on the whole degree vs. certification debate. In my view, it’s not a black or white decision. It depends on the individual and where they are in their career. I hope this blog post has been a thought-provoking one for you, and I would love it if you shared your comments below. Also, if you want to read more of my career advice (it seems to be one of the main questions I get), please help yourself to a free copy of my “Your Route to Cisco Career Success” ebook, available HERE.